Our research is editorially independent but we may earn a commission for purchases made through our links.

Austin, Texas has many nicknames, but many people refer to this eclectic city as the “Bat City.” Texas’ capital city is home to North America’s largest urban bat colony. During peak “bat season,” tourist and locals alike congregate at the South Congress Bridge at sunset to view drones of bats flying out for their nightly hunt. Viewing the bats has become a popular Austin attraction, since it really is a remarkable natural wonder. 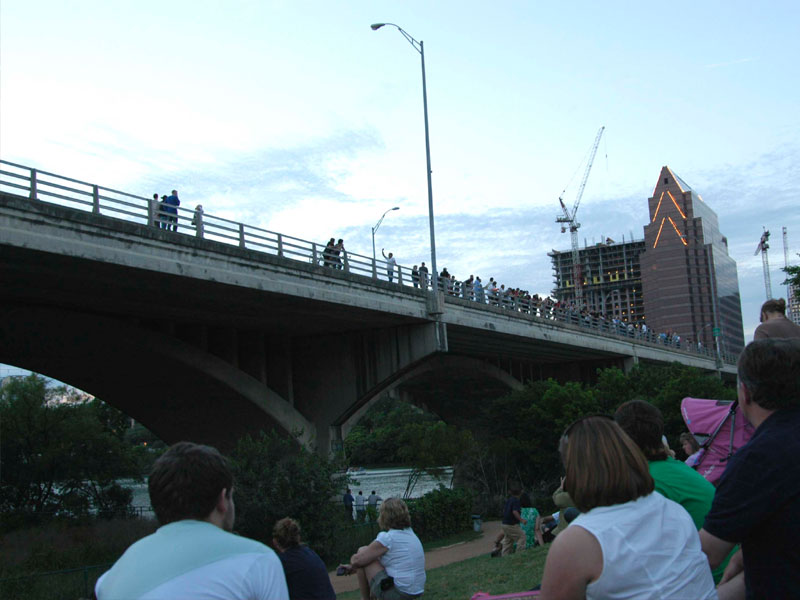 When the South Congress Bridge, also referred to as the Ann W. Richards Congress Avenue Bridge, was built in 1910 and then rebuilt in 1980, the structure included a number of arches, buttresses, gaps and pylons. Here is where the bat colony lives during the summer. Since these Mexican free-tailed bats do migrate, the bats arrive during the spring and leave for Mexico when the weather starts getting cold in November.

When these medium-sized bats arrive in Austin in the spring, the females are pregnant, and the population only totals about 750,000. Therefore during April and May, hungry mother bats are only seen flying out beneath the South Congress Bridge. However in June is when the babies are born. Each mother gives birth to one pup, and once late July and early August arrive, the babies are strong enough to fly on their own. Therefore late July and early August is considered to be peak season, since the entire colony of an estimated 1.5 million bats fly out to hunt.

During peak season is when the annual Austin Bat Festival takes place. However you don’t have to attend the festival to view the masses of bats during this time. Catch the bats from the South Congress Bridge, below the bridge or even by boat at Lady Bird Lake. The bat’s nightly flight usually begins at 8 p.m. and lasts until 9 p.m. During this time, the bats feed on Austin insects; the bat colony here can devour around 20,000 to 30,000 pounds of insects in a single night.

Viewing the Austin bat colony has grown into a wonderful site to see while staying in Austin. However there are things to keep in mind. The bats fly to the east, so make sure you’re watching in the right direction. Also, refrain from handling the bats, and try to keep the area around the bridge and lake clean, since this is crucial bat habitat.

The summer nightly aerial show of bats is a remarkable thing to witness in Austin. The bat colony has become a sense of pride in Austinites. It’s just another thing that keeps Austin batty.

Get Up-Close with Wolves at Saint Francis Wolf Sanctuary in Texas By K.C. DERMODY | JUL 24, 2020

Dreaming of a vacation? You should see this...

18 OF THE WORLD'S MOST INCREDIBLE ALL-INCLUSIVE RESORTS

No thanks, I'll stick to a boring motel...
From
To
Depart
Return
Travelers
City of Stay
Guests
Check-In
Check-Out